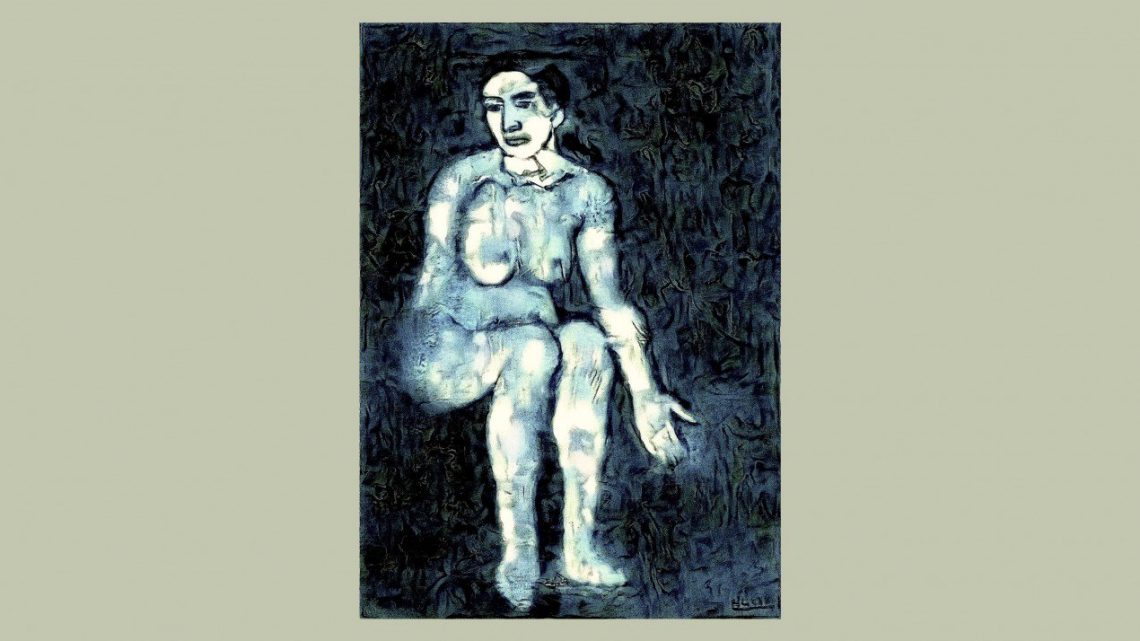 The Old Guitarist is probably the most famous painting from Picasso’s Blue Period. It dates from 1903-1904, when the young artist lived in poverty in Paris. Picasso used the colour blue to depict the emotional pain and despair he experienced at the time.

But The Old Guitarist is interesting for another reason. Art historians have long noticed the presence of the face of a ghostly woman weakly visible under the color. In 1998, restorers at the Art Institute of Chicago, where the painting hangs, photographed it with X-rays and infrared light to see what was beneath the surface.

A very different picture came to light – a seated woman stretching out her left arm. Artists often painted over earlier works, especially in times of poverty when a new canvas is too expensive for them. The researchers then adapted this painting to a composition that Picasso had created in a letter to a colleague at the time.

The new painting gave an important insight into the development of Picasso’s work, his themes and his thinking during his Blue Period. Since he is perhaps the most important artist of the 20th century, this is of enormous importance.

But from an aesthetic point of view, what the researchers have found is disappointing. Infrared and X-ray images show only the weakest contours, and although they can be used to derive the amount of color used by the artist, they show no color or style. So one way to reconstruct the lost painting more realistically would be of great interest.

Anthony Bourached and George Cann of University College London used a technique called Neural Style Transfer to restore the lost Picasso painting to color for the first time. Their approach makes it possible to view the painting as part of the artist’s Blue Period.

Researchers have used the same technique to retrieve lost paintings by other artists and say they have the potential to change the way art historians work.

The neuronal style transfer was developed in 2015 by Leon Gatys and colleagues at the University of Tübingen in Germany. It emerged from a fascinating insight into the way neural networks learn to recognize images of different kinds.

This kind of network would be able to recognize eyes in paintings of various styles, from Leonardo da Vinci to Van Gogh to Picasso. In any case, the eyes form a similar pattern that the machine can pick out.

Gatys and Co. went further by training such a network to recognize the artistic style, for example to distinguish a Van Gogh from a Picasso.

Their most important discovery was that the ability to distinguish the style was completely separate from the ability to see faces or other objects. Gatys and Co separated this ability and used it vice versa. They fed an image into the neural network, which then overlaid the style of the image.

This process enabled them to convert each image into the style of another artist.

This work was of great importance. Different groups used it to produce works of art, comics or even films in the style of any artist.

This process works just as well with Picasso and makes it possible to create an image in the style of Picasso’s Cubist paintings, his Rose Age or even his Blue Age.

This is where Bourached and Cann come in. They took a manually edited version of the x-rays of the ghostly woman under The Old Guitarist and led it through a neural transfer network. This network was trained to convert images into the style of another artwork from Picasso’s Blue Period.