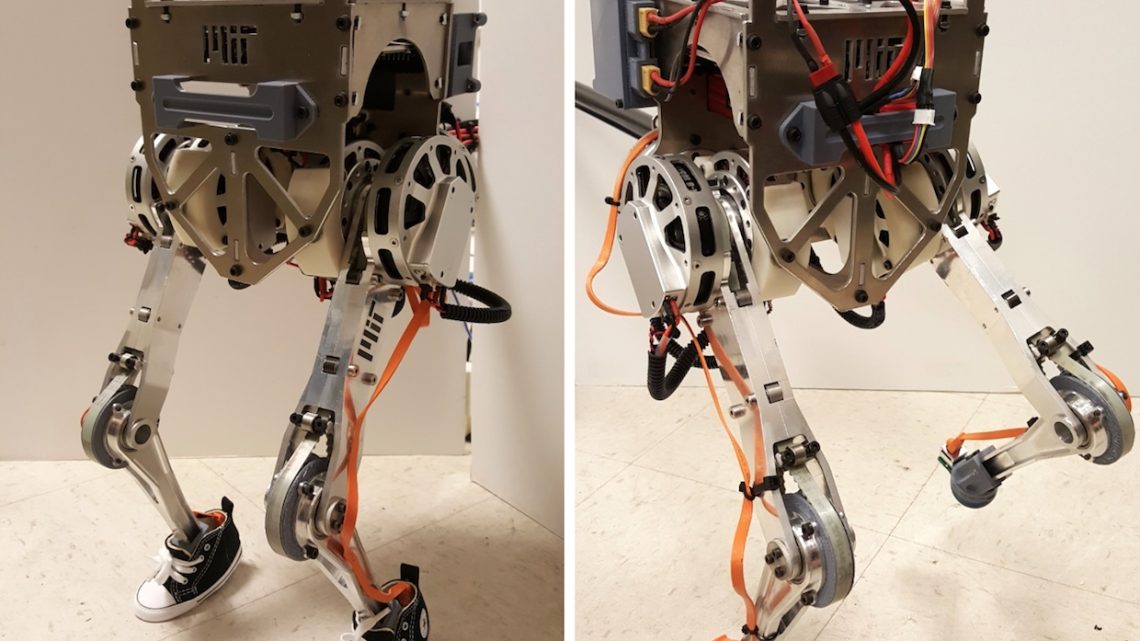 MIT researchers around Joa Ramos have demonstrated with a novel teleoperating system that a two-legged robot can “borrow” the physical abilities of a human operator to be able to move better.

The system works like the haptic suits from the Spielberg film “Ready Player One”. But while the suits in the film were used to connect humans to their VR avatars, the MIT suit connects the operator to a real robot.

The robot is called Little HERMES and currently consists of only a pair of small legs, about a third the size of an adult human. The robot can kick and jump in place or walk a short distance while being guided and supported by a portal. At first glance, this is not impressive, according to the researchers, but it is precisely this approach that could contribute to the use of robots in disaster situations in the near future.

Ramos and his colleagues explain that, despite recent advances, the development of fully autonomous robots with motor and decision-making capabilities comparable to those of humans remains a long-term challenge. However, a more advanced tele-operating system could greatly improve the results achieved to date.

Background: The researchers, João Ramos, today Assistant Professor at the University of Illinois in Urbana-Champaign, and Sangbae Kim, Director of the Biomimetic Robotics Lab at MIT, describe the project in the current issue of Science Robotics. In the paper, they argue that the teleoperation systems used so far often cannot effectively compare the movements of the operator with those of a robot. In addition, conventional systems do not provide the human teleoperator with physical feedback about what the robot is doing. Their new approach addresses these two limitations. To see how it could work in practice, they built Little HERMES.

Earlier this year, MIT researchers wrote an extensive article for IEEE Spectrum about the project, which includes Little HERMES and its big brother HERMES (for Highly Efficient Robotic Mechanisms and Electromechanical System).

In the current article they describe the two main components of the system:

“We are building a telerobotic system that consists of two parts: a humanoid capable of agile, dynamic behavior, and a novel two-way human-machine interface that sends your movements to the robot and the robot’s movements to you. So when the robot steps on debris and begins to lose balance, the operator feels the same instability and reacts instinctively to avoid falling. We then capture this physical reaction and send it back to the robot, which helps it avoid falls. This human-robot connection allows the robot to use the operator’s innate motor skills and reflexes in seconds to maintain its grip. You could say we bring a human brain into the machine.

Here are shots of the experiments that show Little HERMES stepping and jumping in place, taking a few steps forward and backward and balancing. Watch to the end to see a compilation of unsuccessful step attempts.

In the new Science Robotics Paper, MIT researchers explain how they have solved one of the most important challenges to the effectiveness of their teleoperating system:

The challenge of this strategy is to map the movement of the human body correctly to the machine and at the same time inform the operator how accurately the robot reproduces the movement. Therefore, we propose a solution for this bilateral feedback policy to control a bipedal robot that takes steps, jumps and walks synchronously with a human operator. Such dynamic synchronization has been achieved by (i) scaling the core components of human motion data in real time to the proportions of the robot and (ii) applying feedback forces to the operator that are proportional to the relative speed between the human and the robot.

Little HERMES is now taking its first steps, literally, but researchers say they hope to use robot legs with similar design as part of a more advanced humanoid. One possibility they imagined is a fast-moving quadruped that could run through different types of terrain and then turn into a two-legged robot that would use its hands to skillfully manipulate. This could mean that some of the robots built by the MIT researchers in their laboratory would be brought together, possibly resulting in hybrid Cheetah and HERMEN or Mini-Cheeta and small HERMEN.