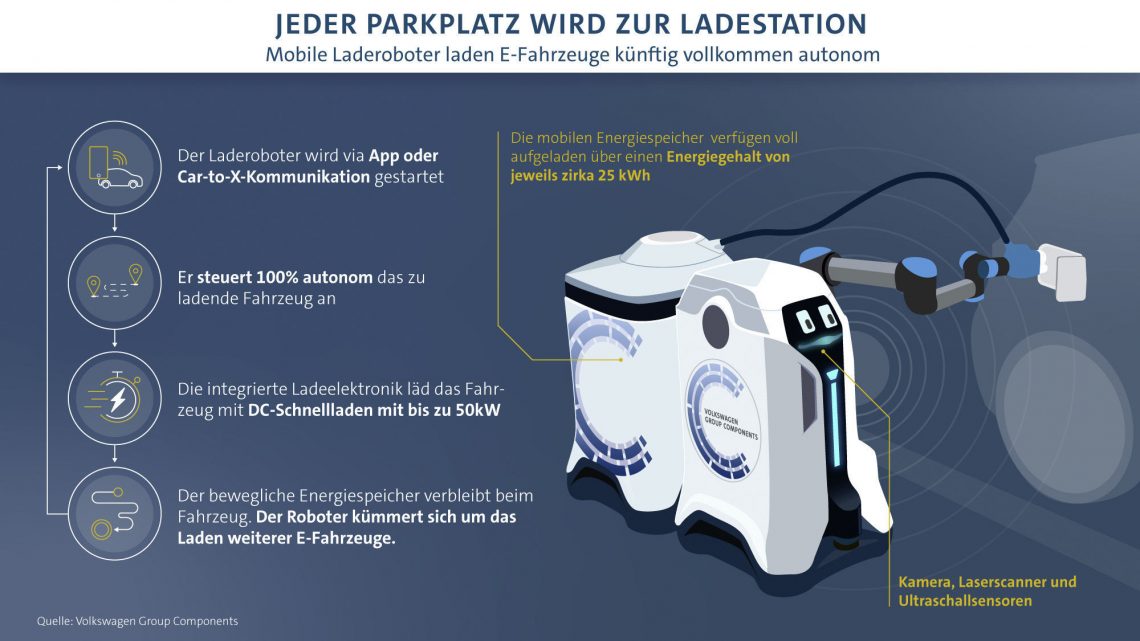 VW wants to put an end to the search for loading places for electric cars. In a “visionary study”, it shows a loading robot that is started via app using car-to-x communication and then autonomously drives the vehicle to be loaded.

Technical background: The energy storage units, which Volkswagen refers to as battery-powered wagons, each have an energy content of around 25 kWh when fully charged. The charging robot can move several battery cars at the same time. According to the company, this energy storage device with integrated charging electronics should enable DC rapid charging of vehicles with up to 50 kW.
“The mobile charging robot can trigger a revolution in charging in parking garages, car parks or underground car parks, for example. Because with it, we simply bring the charging infrastructure to the car and not vice versa,” says Mark Möller, Head of Development at Volkswagen Group Components. “We are thus electrifying almost every car park in one go without the need for costly individual infrastructure measures.
The autonomous robot is equipped with cameras, laser scanners and ultrasonic sensors. “The combination of these systems not only enables it to handle the loading process completely independently, but also to move freely in the parking space, detect possible obstacles and react to them,” explain the developers. Depending on the size of the parking area or the underground car park, several loading robots could be used in parallel, thus allowing many vehicles to be served simultaneously.
According to Volkswagen, a wide range of possible applications are conceivable for the mobile loading robot: “Because it is not just a robot arm that connects a car to a firmly anchored loading column. Instead, drivers have a free choice of parking spaces – regardless of whether or not there is a charging station. The robot brings the charging station directly to the vehicle in the form of a mobile energy storage device”. For operators of car parks, multi-storey car parks and underground car parks, every parking space can thus be quickly and easily electrified. “There is enormous economic potential in this approach,” says Möller. “After all, not only the construction effort required to set up a charging infrastructure, but also the costs can be significantly reduced by using the robots”.
Due to its compact design, the loading robot is suitable for applications in limited parking spaces without charging infrastructure, such as underground car parks. “Even the well-known problem of a charging station being blocked by another vehicle will no longer exist with our concept. You simply choose any parking space as usual. Our electronic assistant takes care of the rest,” Möller continues.
According to Volkswagen, the autonomous charging service presented here is a visionary study – but it could “quickly become reality” if the general conditions are right. However, there is no date yet for a possible market launch of the loading robot.

This is shown by the car companies at the CES