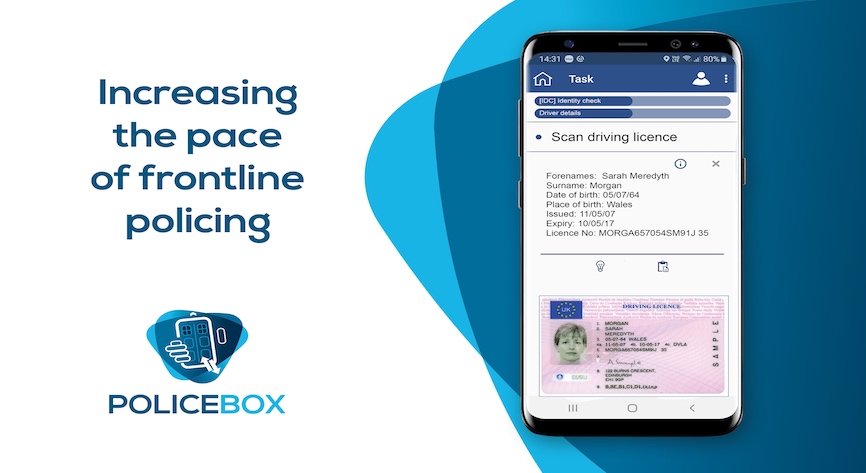 The PoliceBoX has been greatly improved

The PoliceBoX has been greatly improved

PoliceBox, the mobile working platform that allows officers on the front line to perform their tasks from a single intuitive app, has introduced several new features that improve data quality. Officers no longer need to manually enter driver’s license data into their mobile device.

With the new Optical Character Recognition (OCR) functionality, officers can now scan and import data from government documents to run a database query in seconds. This typically saves several minutes of time and also contributes to the security of officers by allowing them to focus on the person in front of them instead of looking at their device.

Simon Hall, CEO of PoliceBox, explains the benefits of adding AI-based OCR capability to the PoliceBox: “When officers need to check a person’s ID, they usually either radio the precinct and give the information orally to someone who has access to the necessary databases, or if they have a police app on their smartphone, they still have to read the data themselves and enter it into the device. These processes are slow and error-prone and can also pose an unnecessary and avoidable risk to the officer. It is important that officers focus on what is happening around them. Anything that allows them to focus 100% on the person in front of them is a positive step towards making our officers and our roads safe.

The new OCR technology in PoliceBox uses artificial intelligence not only to read and import text, but also to understand the type of data being imported (e.g. name, address, driver’s license number, etc.). This ensures that the data is imported into the correct areas of all police databases connected to PoliceBox, so that the search can be performed immediately.

The OCR Smart Datatype is introduced as a “Service Enhancer”, i.e. it can be included in any level of the PoliceBox subscription (Starter, Basic, Professional, Premium). The OCR Smart Datatype is initially introduced with the ability to read driving licences, but this will soon be extended to passports, identity cards, vehicle number plates, vehicle identification numbers (VIN), etc.

As a modern cloud-based platform, the PoliceBox is regularly updated with new features. This ensures that officers do not have to wait long to take advantage of the new features. The new OCR feature is the latest in a series of enhancements that have been added over the past six months, including the ability to perform image-based searches, which enables PoliceBox to recognize fingerprint, facial and other biometric data and import data from mobile fingerprint scanners, including those from CrossMatch, Integrated Biometrics and Grabba.

Other capabilities include: Sketches and image annotations, such as using a finger or pen to draw sketches or comment on photos taken at the scene of an incident to highlight evidence.