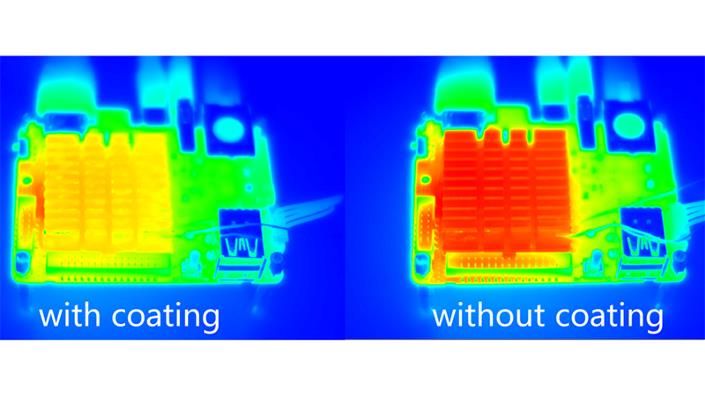 Chinese scientists have developed a metal-based coating for electronic devices. When heated, water is released, which then evaporates and dissipates excess heat. The system is currently too expensive for widespread use, but could be applied to portable devices in the future.

Chinese refrigeration experts from Shanghai Jiao Tong University were inspired by the cooling technology of mammals: they sweat liquid that cools the surface as it evaporates. With this in mind, they developed a metal-based coating that is only three times as thick as a human hair and that keeps the operating temperature of the electronics low by releasing water. When this turns into gas and evaporates, it takes the excess heat generated by the electronics with it.

Senior author Ruzhu Wang, who is studying refrigeration engineering at Shanghai Jiao Tong University, said: “‘The development of microelectronics places high demands on efficient thermal management techniques because all components are tightly packed and chips can get very hot. For example, without an effective cooling system, our phones could have a system failure and burn our hands when we run them for a long time or load a large application”.

Current methods of keeping electronics cool include the use of fans or phase change materials (PCM) such as waxes and fatty acids, which melt as the heat increases and absorb the excess heat energy.

However, some experts claim that this approach is relatively inefficient and that the transfer of water from the liquid to the gas has the ability to consume ten times the amount of energy. In a study published in the journal “Joule”, the authors draw attention to their findings: they coated three 16 square centimetre aluminium sheets with a metal-based coating that was stimulated to sweat.

For comparison, the average width of a human hair is 75 microns.

An uncoated sheet reached 60°C after 5.2 minutes, whereas a chip with the thinnest coating took twice as long and reached 60°C only after 11.7 minutes.

The sheet with the thickest coating reached the 60°C mark after 19.35 minutes of heating.

In addition to effective cooling, MIL-101(Cr) can recover quickly by absorbing moisture again after the heat source is removed, just as mammals can rehydrate and sweat again, says Wang. This method is suitable for devices that are not constantly running, such as telephones, rechargeable batteries and telecommunications base stations, which can sometimes be overloaded,” said Wang.

To investigate the cooling effect of MIL-101(Cr) on real devices, the researchers foamed their sweaty material onto a computer chip. Compared to an uncoated chip, the coated chip reduced the chip temperature by up to 7°C when the device was operated under high load for 15 minutes.