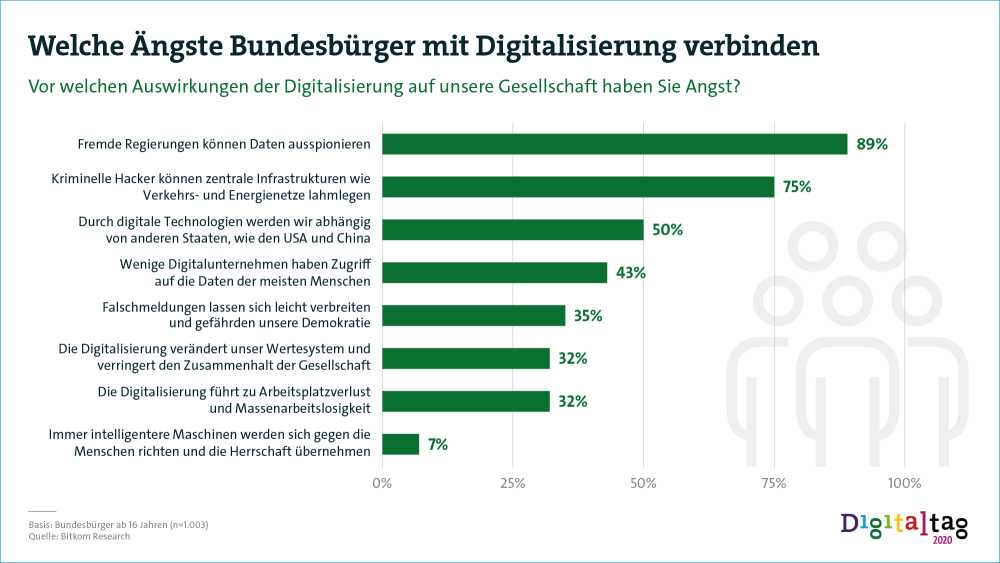 On the occasion of the first nationwide Digital Day on June 19, 2020, Bitkom conducted a survey to determine which consequences of digitization citizens are most afraid of. 89 percent of those surveyed see the imminent danger of foreign governments spying on data. Seven percent are afraid of a terminator scenario, namely that the machines will take over power and subjugate humanity.

Three quarters (75 percent) are worried that criminal hackers could paralyze central infrastructures such as transport and energy networks. One in two is of the opinion that digital technologies will make them dependent on countries such as the USA and China. 43 percent are afraid that a few digital companies will have access to the data of most people. 35 percent are worried that false reports are easy to spread in the digital age. They see this as a threat to democracy. 32 percent complain that digitization is changing the value system and reducing social cohesion. Another 32 percent think that digitization will lead to job losses and mass unemployment.

Hosenfeld: Worries about threats must be taken seriously

“In large parts of society, digitisation is generating a variety of concerns,” says Anna-Lena Hosenfeld, the Digital Day project manager. “Regardless of whether these are perceived or actual threats, they must be taken seriously.” This is where the Digital Day wants to build on and initiate a broad social dialogue. The nationwide action day is also aimed at those people who feel disconnected from digitization and are concerned about digital change.

The Digital Day is supported by the initiative “Digital for All”. This initiative is made up of an alliance of more than 20 organisations from the fields of civil society, education and culture, welfare, business, science and the public sector. The declared aim is to promote digital participation.

“All people in Germany should be enabled to move in the digital world with self-confidence and self-determination,” says Hosenfeld. The nationwide day of action wants to make digitization a tangible experience with numerous events and activities throughout Germany. After the premiere on June 19, 2020, the Digital Day will be held annually in the future.

Brainstorming in Athens in the framework of the Human Brain Project