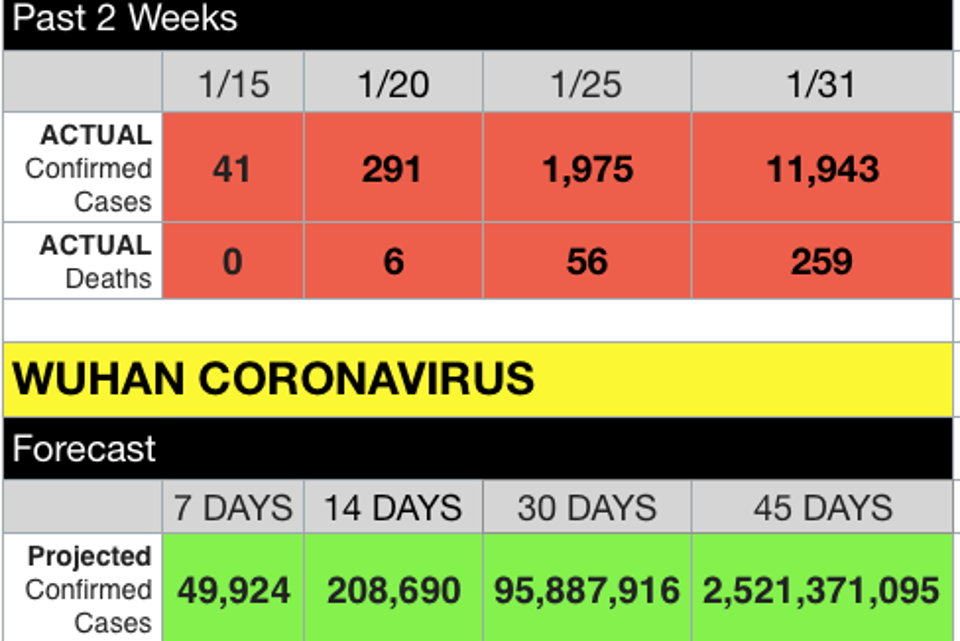 An AI-controlled simulation conducted by a technology manager showed that the coronavirus could infect up to 2.5 billion people and kill up to 52.9 million of them within 45 days- this write Magazin “Forbes”.  Fortunately, however, the infection and detection conditions change, which in turn changes incredibly important factors that the AI is not aware of. Does this mean that we are probably safer than we think?

Rational or not, the fear of the coronavirus has spread worldwide. Surgical-quality masks are sold out in Vancouver, Canada, where many Chinese have recently immigrated. United and other airlines have cancelled flights to China, and a cruise ship carrying thousands of passengers is being quarantined off the coast of Italy after doctors discovered an infected passenger.

All this prompted James Ross, co-founder of the fintech start-up company HedgeChatter, to create a model to estimate the total global reach of the coronavirus.

He started with a daily growth. As a basis he used the data officially published by China. He then transferred this data to an AI neural network using an RNN [recurrent neural network] model and ran the simulation tens of millions of times. This result dictated the forecast for the following day. Once the output was published, this data was added to the previously fed training data and run again ten million times.

The results so far have meant that the figures published the next day are within 3%, says Ross, and the results were shocking. In fact, they were horrifying: from 50,000 infections and 1,000 deaths after one week, they rose to 208,000 infections and almost 4,400 deaths after two weeks – and the numbers continue to grow as each infected person infects others in turn. In 30 days, according to the model, two million people could die. And in just 15 more days, the number of deaths continues to skyrocket at this rate.

But there’s good news, too. The model doesn’t know all the factors, Ross says. Several doctors also believe that the conditions and hence the data will change – a fact that the neural network has not taken into account. This is also likely to have a major impact on the results.

Professor Eyal Leshem of the Sheba Medical Center in Israel says: “If a high proportion of infected people are asymptomatic or develop only mild symptoms, these patients may not be reported, and the actual number of infected people in China may be much higher than reported,” he stresses, adding: “This may also mean that the mortality rate (currently estimated at 2% of infected people) could be much lower.

This consideration must also be taken into account: A broader infection does not sound like good news, but if it means that the death rate is only 5% or even 1% – the coronavirus would suddenly be a much less significant problem.

Moreover, the alarm would have been lifted, which would also change human behaviour. This, in turn, would have an impact on the spread of the disease.

“Effectively containing this outbreak in China and preventing it from spreading to other countries is likely to result in a much lower number of infections and deaths than estimated,” Leshem said.

Dr. Amesh A. Adalja, a senior scientist at the Johns Hopkins Center for Health Security, agrees: “The death rate is falling because we know that the majority of cases are not severe, and once testing is done on larger populations – not just hospitalized patients – we will see that the breadth of the disease speaks against a severe pandemic. Brian Labus, an assistant professor at the UNLV School of Public Health, adds: “The reported death rate at the beginning of an outbreak is usually inflated because we test the sickest people first and many of them die, which gives a distorted picture. The projections seem unrealistically high. Last year, about 8% of the population over 7-8 months was infected with the flu; in this model, a third of the world’s population is infected within 6 weeks”.

Are we over the hill?

Nevertheless, we are not quite out of the woods yet. “To date, with each day that passes, we have only seen an increase in the number of cases and the total number of deaths,” says Regan. “Since each sick individual infects more than one other, the rate of spread seems to be increasing (i.e. accelerating), making containment even more difficult. It seems clear that the disease will continue to spread, and it is unlikely that it can be contained and thus become a global pandemic”.

To sum up further statements by optimistic doctors and researchers, the general flu that has always existed – and is blamed for the deaths of 50 million people after the First World War – still exists. So far this season it has infected 19 million people, caused 180,000 hospitalizations and killed 10,000 people – in the United States alone. But no one is buying masks, closing borders or stopping flights.

Finally, what about James Ross, the technologist who created the AI-driven model in the first place? No one would be happier if his predictions did not come true.