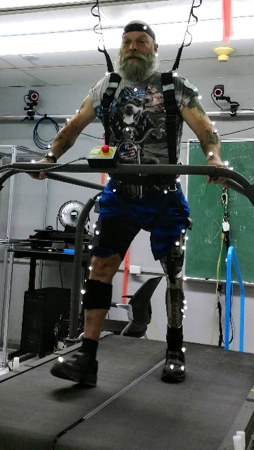 So far, researchers, doctors and engineers have been working to make paralyzed and amputated people not only more comfortable, but also more normal. But what is the right method? Most of these technologies are designed to mimic the body and restore lost function.

The following are available: 1. The passive prosthesis. It returns the basic function of the body part to the user. One leg is supported when the user is standing. A purely cosmetic function has an amputated arm, which receives a prosthesis to fill normal clothing. 2. Motorized prostheses. The user must control them manually. This often requires excessive body movements. 3. power-driven prostheses. They imitate their biological counterpart, i.e. they are a largely precise replica in terms of weight and performance. The user can control them.

However, there are always problems because powered prostheses do not improve the functions of passive limbs. On the contrary, they slow down the movements of the user and thus put strain on other parts of the body.

Dr. Tommaso Lenzi and his team at the University of Utah’s Bionic Engineering Lab have therefore asked themselves: what if we didn’t rely on our bodies to control the technology, but let the technology think for itself? That was the birth of the AI-powered bionic leg.

To develop the robotic leg, Lenzi made two fundamental changes:

One, he decided to develop a motorised prosthesis that was even lighter than a biological human leg. This leg is only half the weight of a comparable powered prosthesis.

2 it is neither manually nor sensorily controlled, but thinks for itself.

The result is a lightweight, bionic leg, an autonomous device that works symbiotically with its user by reading his or her normal body movements. To put it more succinctly, PhD student and team member Sarah Hood said, “We have an amputee walking on a robot.”

And this means that this robot option has the potential to give its user skills that may not be available to the normal body. Dr. Lenzi is convinced: “I believe that we are the generation that will see the physical disability disappear.

*(Basis of this text was an article from the portal freethink https://www.freethink.com/)