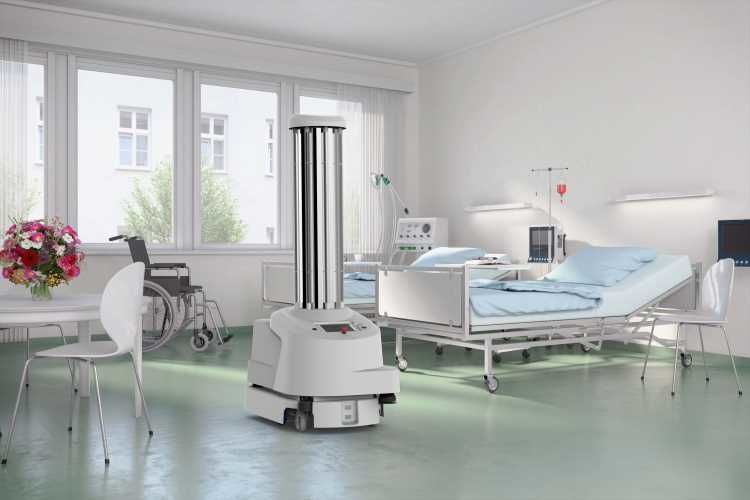 Robots as partners in the fight against the coronary virus

Robots as partners in the fight against the coronary virus

Who would have thought it a few months ago after the outbreak of the coronavirus pandemic: robots are replacing humans wherever it could become life-threatening for them in the fight against the virus. This is especially the case in hospitals, laboratories and warehouses.

“I expect a strong push for service robots,” says futurologist Sven Gabor Janszky. “The robots already exist, but they will now become part of our everyday lives.”

The Danish company Blue Ocean Robotics is one of the largest suppliers of service robots in the world. Their disinfection robot UVD is used in many hospitals around the globe and kills pathogens with ultraviolet light.  “Demand has exploded since the outbreak of the coronavirus pandemic. Instead of 400 percent growth, we now expect it to be two to three times higher,” says Blue Ocean co-founder and CEO Claus Risager. He has ramped up production and is hiring 20 new employees every month. Risager believes that the momentum is continuing: “Before the crisis robots were seen as ‘nice-to-have’, now everyone understands their value.

Robot drives autonomously and disinfects up to 99.99

Blue Ocean Robotics’ UVD Robot disinfection robot travels autonomously through hospitals, emitting concentrated UV-C light to eliminate bacteria and other harmful microorganisms. The device treats the surfaces in a hospital ward with light from several angles and at close range. In addition, it disinfects all contact surfaces and also stops at predefined hotspots that require a longer dwell time. In this way, hospitals achieve a disinfection rate of 99.99%, reducing the risk of patients, staff and visitors becoming infected with dangerous pathogens.

Uvd is in demand worldwide. Chinese hospitals ordered more than 2,000 UVD robots from the Danish manufacturer.  The UVD disinfection robots were used in Wuhan, the site of the global pandemic. The robots are currently used in more than 40 countries. “With our robots, we are helping to solve one of the biggest problems of our time: containing the spread of viruses and bacteria and thus saving lives,” added Risager.

Since the exposure of humans to UV-C light should be avoided, the robot includes a number of safety features: For example, a tablet with a motion sensor is placed on the door of the patient’s room. The UV-C light switches off automatically when someone enters the room.

For safety reasons, the devices in the rooms operate independently and switch off the UV-C light automatically as soon as someone enters the room. The collaborative robot can be used in a wide variety of rooms – not only in hospitals. The technology also works in offices, shopping centres, schools, airports and production facilities.

The potential for medical robots is enormous

“The potential of robots to support us in the current severe corona pandemic is enormous,” says Dr. Susanne Bieller, General Secretary of IFR. “They support us in the healthcare sector, but also in the development, testing and production of drugs, vaccines and other medical devices and aids. Disinfection tasks – as performed by the UVD robot – or the safe distribution of hospital material in quarantine zones without human contact – which, for example, the mobile robot Phollower from Photoneo performs – are just two of many examples.

Medical robots already constitute a separate, well-established service robot market with considerable growth potential. Sales of medical robots rose by 50% to 5,100 units in 2018. This is according to the World Robotics report presented by IFR.

In order to benefit from this and compensate for other sales losses, many companies are pushing the envelope, developing new robots or adapting existing equipment to new requirements. “In the coming weeks, we will see many concrete applications in which robots are used for the benefit of society,” says Susanne Bieller, Secretary General of the International Federation of Robots IFR. Siemens, for example, also developed a disinfection robot within weeks. “The ideas are just springing up like mushrooms. That has a lot to do with the spirit of the founder,” says Patrick Schwarzkopf of the German Engineering Federation (VDMA).

Accelerating laboratory processes and measurements, disinfecting hospitals, producing face masks, and securing medical treatment: In view of the corona pandemic, there are many important tasks in which robotics and automation provide valuable services or could do so in the future. Here are a few examples:

An innovative measuring method developed by Fraunhofer researchers in Stuttgart helps to detect corona-infected people from a safe distance. It registers fever, elevated pulse and rapid breathing without endangering the measuring employee. The FraunhoferIPA method measures all relevant parameters from a distance of one meter. The employee who performs the measurement from a laptop can easily maintain the required minimum distance of one and a half to two meters. The Fraunhofer Institutes IPA and IAO are currently testing the method at the Robert Bosch Hospital in Stuttgart.

The method measures not only body temperature with a thermal camera, but also heart and respiratory rates with the aid of microwaves. A radar module with a micro-Doppler method is used. The research team now checks on site whether and how exactly the measuring procedure corresponds to the data collected by nurses in the entrance area and whether the procedure is practicable. The procedure was developed in just a few weeks and is intended to contribute to the fastest possible containment of the corona pandemic.

In the fight against the corona virus, China is increasingly using 5G police robots from Guangzhou Gosuncn Robot. They have already been spotted at airports and shopping centres in Guangzhou, Shanghai, Xi’an and Guiyang. Their task is to assist police officers in carrying out inspections for disease prevention. For this purpose, they are equipped with 5 high-resolution cameras and infrared thermometers that can scan the temperature of 10 people simultaneously within a radius of 5 meters.

If an increased temperature or the absence of a face mask is detected, the police robots send a warning to the relevant authorities. All data can be transmitted to a central control centre to enable a situation-specific response in real time.

Assembly equipment manufacturer PIA Automation helps to respond to the sharp increase in demand for face masks and other personal protective equipment (PPE). The assembly equipment manufacturer offers fully automated assembly lines for the high-speed production of protective masks. Since the rapid spread of the virus, PIA in Amberg has received over 100 inquiries from all over the world.

The Amberg site is home to the PIA Group’s medical competence center and has now been commissioned to produce a dozen fully automated systems for the manufacture of face masks. Many companies are responding to the call of the Bavarian state government to establish a national production of personal protective equipment. Among them is Zettl Automotive, which is now setting up the production of face masks in partnership with PIA. The goal is to produce about 1 million face masks per day. With this ambitious project, both companies are demonstrating that – in addition to “social distancing” – “industrial approach” can also contribute to the containment of the corona virus.

Each of these fully automated production lines for high-speed manufacturing can deliver up to 140,000 face masks (depending on type and material) per day, which is many times the amount currently produced by hand. In Europe, PIA can ensure that the demand for such masks is met, especially in view of the expansion of compulsory wearing in more and more countries.

Siemens, in cooperation with the Chinese company Aucma Co. Ltd. has developed an intelligent disinfection robot from the idea to the prototype in just one week. This robot is soon to be used in the fight against corona and other viruses in hospitals, schools and other public institutions.

The electric robot cleans an area of up to 36,000 m² within one hour with two spray guns and overcomes obstacles and height differences with its chassis. A 360° camera platform on the top transfers image data and information in real time.

Robots for laboratory and hospital

With a mobile and collaborative YuMi robot for laboratory and hospital, ABB aims to support medical and laboratory staff in laboratory work and logistical tasks in hospitals. To this end, ABB has opened a global health care hub dedicated to health research on the campus of the Texas Medical Center (TMC) in Houston.

The mobile YuMi robot can perform a wide range of repetitive and time-consuming tasks, including preparing medicines, loading and unloading centrifuges, pipetting, handling liquids, and picking and sorting test tubes.

The mobile YuMi could also be used in hospitals for logistics tasks. For example, YuMi could dose medicines, take them to where they are needed in the hospital, provide medical supplies for hospital staff or deliver bed linen directly to patients’ rooms. This allows medical and laboratory staff to concentrate on more demanding tasks, which ultimately allows more patients to be treated.

The quick and correct insertion of a breathing tube into the lungs (intubation) can save a patient’s life. A robot-based system from Zurich uses image recognition to find its way into the trachea on its own and supports inexperienced patients. Realiti (robotic endoscope-automated via laryngeal imaging for tracheal intubation) uses image recognition to automatically find the right path into the trachea and transmits the entire process to a video screen.

The portable and simple device works like an endoscope, onto which the breathing tube is pulled and then advanced into the trachea. A camera is mounted at its tip, which not only continuously transmits the image to a monitor, but also permanently compares it with stored images of the human anatomy in the throat and larynx.

Verge: 12 of the most important questions about the Coronavirus Tracking Project of Apple and Google and the answers