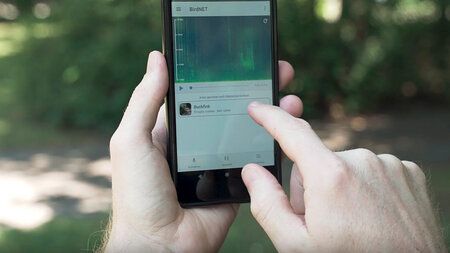 Media computer scientist Dr. Stefan Kahl from the Chemnitz University of Technology has described the app “BirdNET” as an “incredible success”. Justification: “Our app provides variety, entertainment and knowledge in the home environment or during walks in nature – something I’m sure many have longed for.”

It can already identify 3,000 bird species by their songs through an AI algorithm. The app has now been downloaded over a million times from the Google Playstore. With over 5,200 reviews, it currently scores a 4.6 out of 5.

Kahl developed the bird song program together with colleagues from Chemnitz and Cornell University in the USA in 2018. The researchers relied on “artificial intelligence” (AI). Users send their audio recordings from nature to a neural network in Chemnitz. The network then analyzes the data and tries to identify the bird behind the recorded chirping.

Recognizing bird calls is by no means simple. That’s because the core of the app is an AI-supported algorithm connected to a server at Chemnitz University of Technology. Thanks to the artificial neural network, this determines the recorded bird voice when a request is made. Kahl and the team therefore had to ensure that the speed of the app would not suffer as the number of users – and thus search queries – and bird species increased.

Meanwhile, the app has already been downloaded more than a million times on Android smartphones.

What does the bird call app offer?

– Automatic recognition of bird calls based on short audio excerpts.

– The app visualizes the sounds of the environment, allowing users to also see what bird calls look like.

– The app decides whether a particular bird species can be heard based on the audio data, but also on location and date.

– Once a species has been identified, details can be displayed.

– Observations can be saved and shared with friends.

– Each observation is registered anonymously and evaluated for research purposes.

– Feedback from users is continuously incorporated into the design of the app and the features implemented.

– The app is designed to help people get to know their environment better and, ideally, to increase their ecological awareness.

In the first phase of the app programming, the research team had initially limited itself to the most common species in Europe and North America. Now, people all over the world can identify their native songbirds. Another innovation concerns the app’s platform, as BirdNET is now also available for iOS devices.

However, the app offers added value not only in the recreational sector, but also for ornithological research: “People who use our app are actively working to improve it, so to speak. Because if we know where which species are, we can, for example, investigate bird migration routes or local dialects,” explains Kahl. In this way, the app also contributes to raising awareness of nature’s biodiversity and to researching it.

The app “BirdNET: Recognize bird calls easily” is available in the Play Store for Android devices and in the App Store for iOS devices.

Multimedia: A briefing on how the app works and the research background by Dr. Stefan Kahl is available in the series “Statements from Research”. The video can be found on the YouTube channel of the TU Chemnitz.