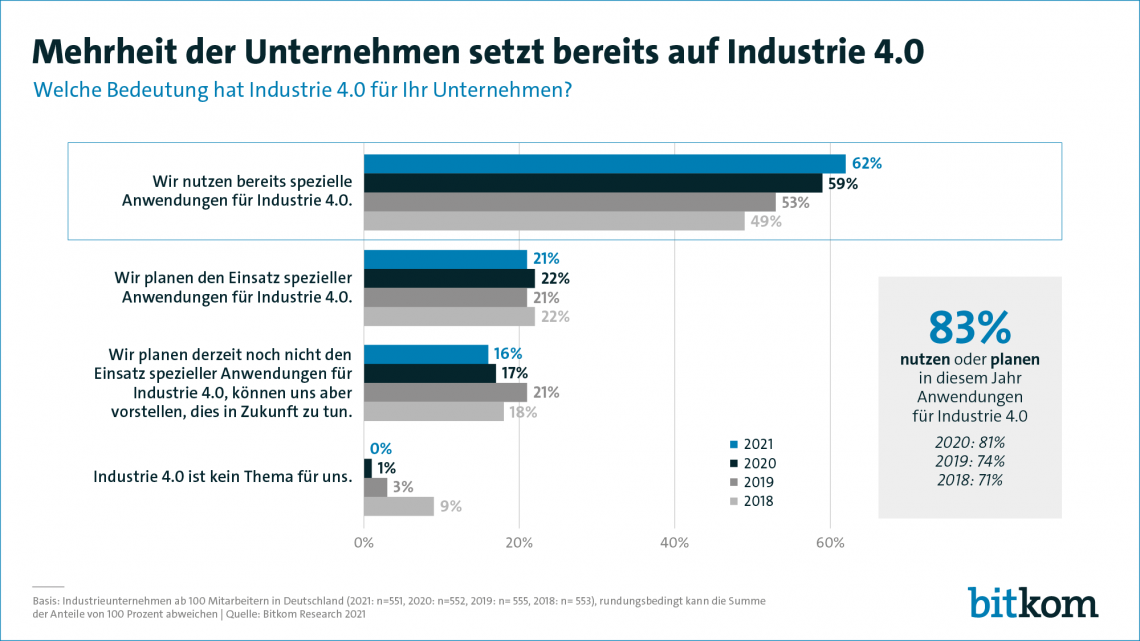 According to a survey of 551 industrial companies with 100 or more employees conducted on behalf of the digital association Bitkom in February and March 2021, 95 percent said that digitization had become more important in their companies as a result of the pandemic. 6 in 10 industrial companies (63 percent) said digital technologies helped them cope with the Corona pandemic. And three-quarters (77 percent) found that companies whose business model was already digitized were better able to get through the crisis.

On the other hand, 4 in 10 (42 percent) industrial companies with 100 or more employees said they had come through the Corona period very badly so far, and around one in four (23 percent) rather badly. Bitkom CEO Dr. Bernhard Rohleder demands: “The Corona pandemic must be used to drive forward the digital transformation of German industry.”

The following result shows that German companies have recognized this: 81 percent of companies have adapted their existing products to the changing conditions, 49 percent are offering new products and services, and 29 percent are removing certain offerings from the market. In 4 out of 10 industrial companies (42 percent), the business model has changed as a result of the Corona crisis. There are even signs of a sustained digitization push in the coming months, with 61 percent of companies stating that they intend to drive digitization forward in the long term. 62 percent expect a surge in innovation.

Industry 4.0 is now an issue for all major industrial companies. Almost two-thirds (62 percent) are already using special applications such as networked production facilities, real-time communication between machines or intelligent robots. Three years ago, the figure was 49 percent.

Currently, 4 out of 10 industrial companies with 100 or more employees use IoT platforms that allow data from devices, machines and plants to be consolidated and analyzed at a central location. One in three (32 percent) are planning to use them in the future, and only just under one in five (19 percent) are not currently considering IoT platforms.

The 5G mobile communications standard is of outstanding importance for connected production. In the meantime, 85 percent of industrial companies consider the availability of 5G to be important. A year ago, the figure was 72 percent. Conversely, the proportion of companies that consider 5G unimportant has halved from 26 to 13 percent.

The companies criticize a variety of obstacles that hamper the deployment of Industrie 4.0 applications. For example, 77 percent would like to invest more and complain about a lack of financial resources. 61 percent feel hampered by data protection requirements. 57 percent by IT security requirements. One in two companies (55 percent) lacks specialists, a similar number (52 percent) feel overwhelmed by the complexity of the issue, and 48 percent complain about the susceptibility of systems to failure. Twenty-nine percent lack an exchange with other companies, and one in four companies (25 percent) does not have enough time to deal with the issue.

Accordingly, the industrial companies formulate very specific wishes. In each case, 8 out of 10 plead for a reduction in legal uncertainties when exchanging data with other companies (84 percent), the promotion of investments (80 percent) and accelerated broadband expansion (78 percent). Around two-thirds (63 percent) expect more and better information and consulting services, and one in two (53 percent) expect Industrie 4.0 to be integrated into training and studies. 48 percent would be helped by training and continuing education programs for employees, 47 percent by funding programs for research and development, and 34 percent by the establishment of standards.