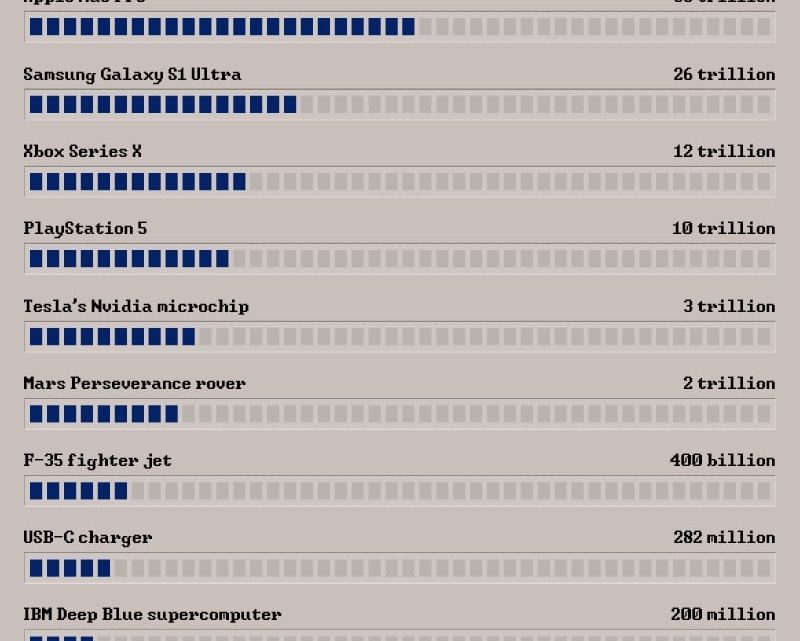 Does Tesla have the world’s most powerful chip?

Does Tesla have the world’s most powerful chip?

New York, 7/2/2021
According to a study by Select Car Leasing, Tesla’s microprocessor AI has more operations per second than the most powerful fighter jet, the F-35 Lightning II, as well as an Apple iPhone, the Apollo 11 rocket that put men on the moon, and more.
https://www.selectcarleasing.co.uk/news/article/the-power-of-teslas-on-board-brain
The only “computer” that outperforms Tesla’s AI chip is the human brain, which can achieve a computing power of one petaflop, or a quadrillion operations per second.
Tesla’s chips are made up of two neural network arrays, each capable of 36 trillion operations per second and processing GPS, camera, sensor and radar data. Tesla says its chip is a 21-fold improvement over Nvidia chips.
Elon Musk recently replaced Nvidia’s previous chips with Tesla-developed and Samsung-manufactured chips that are reportedly a 21-fold improvement over Nvidia’s previous chip. It consists of two “neural network arrays” that can each perform 36 trillion operations per second. This means it can process camera, sensor, radar and GPS data on the fly – particularly useful for Tesla’s automated driving features. It’s even claimed to be smart enough to run fully self-driving cars, if the technology and the law allow it.
By comparison, the IBM Deep Blue supercomputer that beat world chess champion Garry Kasparov is far behind at 200 million.
Most amazingly, the Tesla chip could repeat Neil Armstrong’s, Buzz Aldrin’s and Michael Collins’ journey to the moon an unfathomable 144 million times. The new Model S as well as the Model X feature an in-car display capable of 10 teraflops alone – almost as much as the PS5 and Series X. Musk himself teased the ability to play full video games on the system.

Tesla to use Dojo supercomputer to support autonomous driving