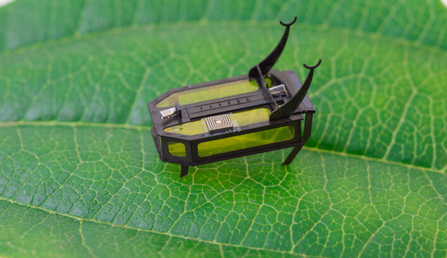 “Robeetle” is the world’s lightest robot

“Robeetle” is the world’s lightest robot

A Washington State University scientist has developed the world’s lightest robot, “Robeetle,” according to the latest Guinness World Records. Néstor Pérez-Arancibia’s autonomous robot weighs 88 milligrams, the equivalent of about 3 grains of rice, and tows 2.6 times its own weight.

The beetle-inspired robot is a proof-of-concept designed to demonstrate the feasibility of new robotics technologies. It crawls with the help of an artificial “muscle” made of a shape-memory alloy that expands and contracts with the heat of methanol combustion. It can climb inclines and navigate different surfaces.

Pérez-Arancibia and colleagues added a wireless RFID chip to the robot to make it a “mini-gate opener.”

Such small robots could help with search-and-rescue missions and operations and work in swarms for artificial pollination. Pérez-Arancibia founded and directed the Autonomous Microrobotic Systems Laboratory at the University of Southern California.