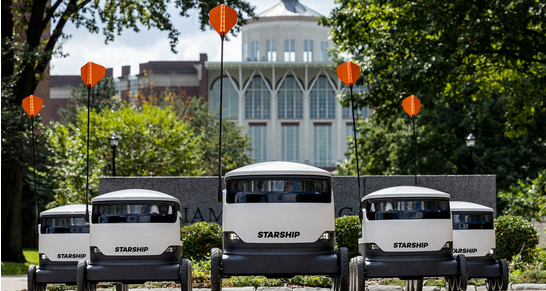 Is a ban on delivery robots now looming?

Is a ban on delivery robots now looming?

A delivery robot and a Ford Escape had a minor collision on the University of Kentucky (UK) campus. The autonomous robot from Starship Technologies had the right of way at a crosswalk, but was struck by the SUV. It is not clear if any damage was done.

Starship recently began delivering to the United Kingdom, along with three other universities, bringing its total to 24 locations. Users order their food through an app, and the Estonia-born company’s electric, six-wheeled delivery robots deliver to a designated location.

Starship has about 1,000 delivery robots that make an estimated 80,000 daily passes. Thanks to sophisticated sensors, such collisions are usually avoided, although drivers may have trouble seeing them because of the bots’ small size.

Similar robots are popping up across the country-from Modesto, California, to the suburbs of Seattle-to deliver groceries and more while reducing traffic and carbon emissions. Amazon’s Scout robot and FedEx’s Roxo are also being tested in various cities.

More and more delivery robots are reportedly taking over sidewalks and roadsides. These semi- or fully-autonomous machines are likely to revolutionize grocery and package delivery, although there are still some issues (such as accidents and stuck robots) that need to be addressed.

Pennsylvania is the latest state to allow delivery robots to share sidewalks with humans. A state law classifies autonomous robots as pedestrians. This makes Pennsylania the tenth state (plus Washington D.C.) to explicitly pass laws allowing robots to operate.

In 2019, the National Association of City Transportation Officials released its second “Blueprint for Autonomous Urbanism,” which calls for a “comprehensive overhaul” of the way our streets are designed and shared; it says such bots “should be severely restricted or even banned altogether.”

Unique insights into the talent pool for software engineers