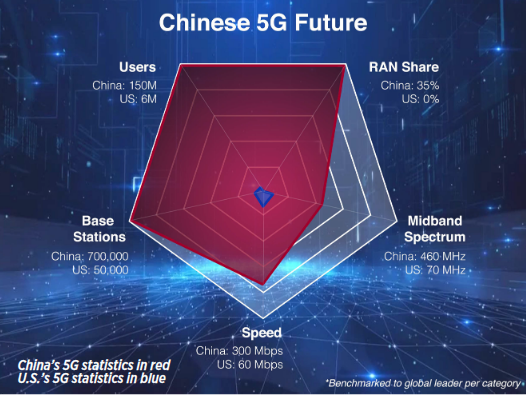 China is expected to rival or surpass the U.S. in key 21st century technologies – including semiconductors, AI, 5G, biotechnology and quantum computing – within the next decade, according to a report from Harvard University’s Institute for Public Policy.

China is already the world’s leading manufacturer of high-tech devices, including computers, cars and smartphones. The country is catching up or already ahead of the U.S. in other key technology sectors, the report said.

The report, titled “The Great Rivalry: China vs. the U.S. in the 21st Century,” comes from the Harvard Kennedy School’s Belfer Centre for Science and International Affairs. China is now a “peer competitor” to the U.S. in artificial intelligence technologies, with 6x more Deep Learning patent publications than the U.S. The authors are also convinced that China is catching up, and indeed has already surpassed the US, in quantum computing, quantum communications, and quantum sensing.

The U.S. leads in 5G research and development, standards, and applications, although indicators point to China’s potential dominance in this area. There are 150 million 5G users there compared to 6 million in the US.

In addition, Chinese language technology companies would surpass American companies in all languages, including English. China’s iFlytek, a speech recognition startup, says it has 700 million users, nearly twice as many as Siri.

The U.S. has “given up” in the race for facial recognition due to security and privacy concerns, the authors point out. Chinese R&D investment in AI is now on par with that of the US. Projections are that China will graduate four times as many STEM bachelor’s students and twice as many STEM doctoral students as the U.S. by 2025.

Overall, seven of the most valuable AI startups are based in the U.S., three of which are Chinese. The U.S. has a significant lead in the number of best paper awards given at major AI conferences.

China is expected to compete with or overtake the U.S. in other key 21st century technologies, including semiconductors, 5G, biotechnology and quantum computing, the report said.