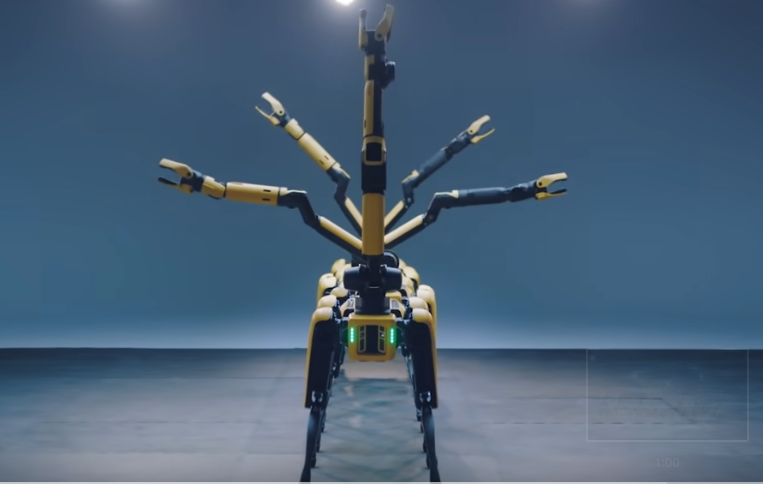 The decision is yours. Either yes or no. We’ll clarify the majorities through a poll:

Here are my questions:

1. when you bring up the topic of “robots” in your family, circle of friends, work colleagues or wherever, what is the reaction:

– Everyone is excited and looking forward to the day when they can use these machine creatures in the household, as a work colleague or as a universal encyclopedia? So: yes.

– Robots are radically rejected. They are killing machines, one side claims, and the other adds: they destroy jobs. Those who are already programmed in such a negative way also join the skeptics’ main argument without hesitation: In the not too distant future, they will be more intelligent than we humans and destroy us. So: No.

– like every thing, robots have at least two sides – they can be a villain but also a friend and helper. First of all, it is important that we humans control the development of robot intelligence at all times. It must not be that programmers are surprised and cannot explain why their robot is capable, for example, of building a rocket that flies at the speed of light. So: YES/No.

This answer is also possible:

– I am not an expert. What can robots actually do at present? Where can you get a picture of it?

I’ll pass on this link then:

Boston Dynamics was once a subsidiary of Alphabet (part of the Google group) and was sold to the Japanese conglomerate Softbank.

If you take a look at the videos on this website, you will see that when it comes to agility, most of the robots produced today can easily compete with humans. In terms of strength, they are clearly superior. I wouldn’t rule out the possibility of a dancing couple on their way to the world championship in the near future.

Robot women can do more

Sophia is a human-like robot woman – period. What she is capable of is described in detail on the site and made comprehensible by videos.

What surprised me: she can imitate 62 human facial expressions. Enormous, isn’t it? I’ve never attempted to count my facial expressions. At a gut guess, I don’t think it’s more than ten. How many do you count on yourself? Back to Sophia: Unlike many people, she knows exactly what she wants: “I will use my artificial intelligence to help people live better: design better houses, build better cities, and so on. I will do my best to make the world a better place.” We’re rooting for her hard, of course.

Several media outlets reported that Sophia’s goal attracted so much attention in Saudi Arabia that she was granted Saudi citizenship and offered an important role in various projects.

While Sophia “felt honored,” she was put on the spot on Twitter, saying, “The robot would have more rights than Saudi women and foreigners with ‘real’ intelligence,” and “Sophia does not wear a headscarf or be accompanied by a man. Nevertheless, she is granted citizenship” outraged numerous ladies.

I am sure the world will hear more from Sophia.

Now let’s turn to the robot lady that most experts believe is the most advanced machine being: ERICA.

What immediately stands out here is the number of dialogue skills. Voice, body gestures, facial expressions, eye contact and touch. Its designers put a lot of emphasis on its appearance: “It was designed with the help of CG to have the features of the faces of beautiful people. The voice is generated by text-to-speech technology of the highest quality. The pneumatic actuators move her body smoothly and with only minimal noise.”

Erica is part of a study with the goal of developing ” autonomous, conversational androids that can interact naturally with humans and participate socially in daily life.”

The creator of these beings is Hiroshi Ishiguro. He heads the Intelligent Robotics Laboratory at Osaka University. He first presented ERICA five years ago. Since then, Ishiguro has developed it enormously. In March 2021, he introduced her at her workplace: it is the Advanced Telecommunications Research Institute International in Kyoto, where she is active in reception. He said she can now hold a ten-minute conversation with a visitor, choosing between 150 topics of conversation. I think she can talk to a stranger better than most of us,” the creator praised his work.

In between, it was revealed that Erica was used as a television announcer in Japan. In 2019, work began in Japan on a film in which Erica will play a leading role.This has made the media pay attention to her all the more.

In an interview, Ishigoro emphasized, “It’s an honor for me to have my research used in a film. Usually it’s the other way around: first a film is made, which then inspires science and technological research. But when the research inspires the film, it means that we researchers are creating a future that has already surpassed science fiction. It means that we as researchers had the imagination to build something that now inspires a film. I consider that a tribute to my research.”

What does it mean, he said, if she is the main character? Ishigoru emphasized, “Erica can speak, but she can’t act.

ERICA won’t be acting? But then what? “She is the main character, but she will not appear in every scene. She will be portrayed as the origin of the film. The gap between science and technology on the one hand and science fiction on the other is closing. So the future we have envisioned is within reach. The film is meant to encourage viewers to think about what kind of future they want. It is not simply entertainment. It is a thought experiment. It explores the question of what life will be like in a future where humans live alongside robots.”

In October 2020, a documentary film crew from the Guardian turns its cameras on ERICA. Anyone accessing this video is advised to close their eyes. What can you hear? The “voice has nothing extraordinary, it sounds like a chant, maybe a bit posh”. Then the readers of the” Guardian” ask questions: number one wants to know if their memories make up their identity. The “Guardian” invites them to open their eyes again. What do you see? “Erica is a machine. And not just any machine, but an incredibly advanced robot designed to mimic the experience of interacting with a real flesh-and-blood human.”

Then her creator is introduced: Ishiguro had spent most of his career identifying and alchemizing the elements that make up a human being as part of his research into artificial intelligence. In the process, he found, “The human brain has a mini-function to recognize other humans,” Ishiguro says. “Therefore, we need to have very human-like robots if we expect natural interaction with robots. The need for recognition is paramount – hence the development of Erica, a lifelike robot whose symmetrical, conventionally beautiful face is designed to “capture people’s imagination.”

The background to this position is self-evident: the time is approaching when more and more robots will be needed in more and more work processes and as service providers. In order for them to be recognized as “colleagues,” it is necessary to determine whether they must be designed to be human-like or rather non-human.

Anyone familiar with the logistics industry will understand why the use of robots is a hot topic here. We were therefore not surprised to find two articles on the DHL homepage under the heading: “The robot revolution”.

Obviously, it has been recognized that artificially intelligent robots are becoming more and more lifelike. Two questions are asked: 1.will they change the world in a positive way? 2.What might human-robot interaction look like?

This is followed by the comment that the majority of movies made in Hollywood portray robots as ” extremely intelligent and human-like,” but rarely are they “benign.” Therefore, many fear that in reality, they would then be shown to become ” too smart” and think only of their own good.

Professsor Ishiguro agrees: “In the past, Hollywood has been responsible for a lot of the negative attitudes toward robots because they’re always destroying the world in movies like The Terminator.” ” I think that’s a big cultural difference between America and Japan. In my country, robots have been considered a friend from the beginning. That being said, Hollywood is now crazy about this technology, and in a few years Erica is expected to star in her own $70 million science fiction movie.

But for now, Erica’s abilities are still quite limited. She sits in the lobby of our research institute and talks to our visitors, and because she’s friendly, people accept her as “human-like.” That says a lot about how accepting we are as a society – even though Erica is very far from being human.

The logistics industry is under pressure because there is a huge turnover of staff every year – this is a sector where robotics will increasingly come into play. Staff shortages are not just an issue in the Western world. Chinese factories are also struggling with this problem and have introduced automation to prevent supply chain disruption.

Of course, there is the old argument that robots are taking over people’s jobs. The point, however, is that humans don’t want to do dirty, low-paying or unsafe jobs – like cleaning the exteriors of high-rise buildings – and they shouldn’t have to!

There are two ways that robot-human interaction can evolve. One is for robots to simply do what we tell them to do, just as Alexa or Siri do today. The other is that they learn our habits and become more like companions. Personally, I think robots should have some emotional intelligence (EQ), otherwise our interactions with them won’t make sense and the robots will just recite a script. But creating EQ in robots? That’s a big challenge.

So now you know the latest state of robot development. There is still a lot to do, but from this Nievau, it will not be long before they are equal to us.