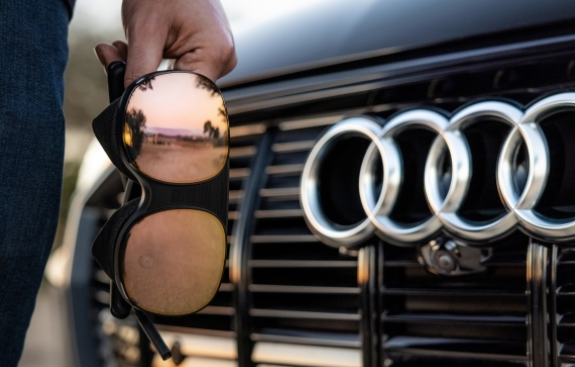 From June 2022, the time has come: Audi will be the world’s first automaker to bring holoride virtual reality entertainment into series production. Rear-seat passengers will then be able to put on virtual reality (VR) glasses and immerse themselves in various media formats such as games, movies and interactive content. The highlight here is that the virtual content adapts in real time to the car’s driving movements.

The technology will be showcased at the South by Southwest® (SXSW) music, film and tech festival in Austin, Texas. There, interested visitors will be able to take rides in the back seats of all-electric Audi vehicles. holoride is closely associated with South by Southwest and won the prestigious SXSW Pitch 2021 in the category -Entertainment, Gaming & Content- as well as the “Best in Show” award.

Audi explains, “Behind Holoride is a technology that adapts virtual content in real time to the car’s driving movements: For example, if the car makes a right-hand turn, the spaceship in the imaginary world also flies to the right. If the car accelerates, the spaceship also speeds up. Initiated by Audi, the development of this innovative VR or XR (extended reality) technology is being driven by the tech entertainment startup holoride and marketed for various manufacturers.

Audi says the Munich-based startup has established an entirely new media category it calls “Elastic Content” – content that adapts to driving movements, driving time and driving distance. The result, it says, is “an immersive experience of unprecedented quality.”

The following Audi models will be holoride-enabled starting in June: Audi A4, A5, A6, A7, A8, Audi Q5, Q7, Q8, Audi e-tron* and Audi e-tron GT quattro. These models will be offered on the European market as well as in Canada, the United States, Japan and China.

To use holoride, an unlocked virtual reality headset must be connected to the vehicle. The connection is made wirelessly via Bluetooth Low Energy (BLE).

Background: a brief history of holoride

Holoride was first unveiled at CES 2019 (Consumer Electronics Show) in Las Vegas. In cooperation with Disney Games and Interactive Experiences, holoride realized a VR game experience from the Marvel universe for cars. Among other activities and showcases, holoride visited other production and game studios in the summer of 2021 during a roadshow through California from Los Angeles to San Francisco to demonstrate the possibilities of the technology to potential partners.

Visitors to the IAA 2021 in Munich were the first to take holoride on demo rides. Visitors to the Salzburg Festival were also able to enjoy holoride in the back seat of an Audi e-tron and experience a journey back in time through the musical eras of the city of Salzburg in search of a young Mozart.

Audi has correctly recognized that “the progressive automation of driving will not only offer entertainment in the future. Learning and working will also be possible.

Thus, designers for the interior will play an important role in the future. Designers will then be faced with the question: Who are the buyers of these models and what will they want to do in these “spaces”?

Does Putin have the better hackers ? Part 4 Ukraine: Fully targeted by Russian hackers