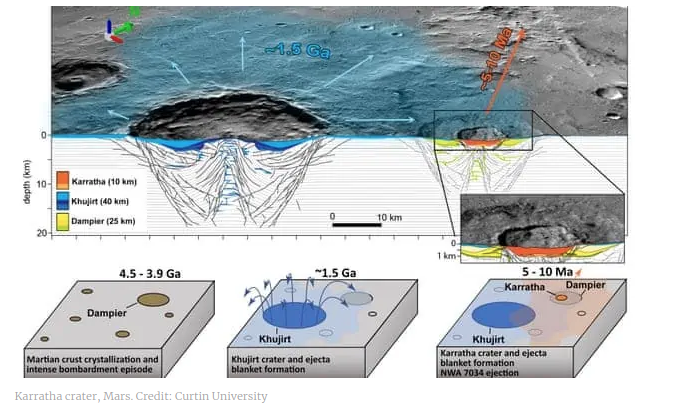 Scientists have used artificial intelligence to identify the Martian crater that ejected a 2.1 billion-year-old meteorite that struck the Sahara Desert. The famous meteorite, nicknamed Black Beauty, was found in Africa in 2011.

To determine its point of origin, researchers led by Australia’s Curtin University developed an algorithm to analyze the millions of craters on the surface of Mars.

Using a supercomputer and AI software, they found and listed about 90 million craters on Mars. Further investigation allowed them to narrow down the list of candidates to a crater with the same characteristics as Black Beauty.

This crater, named Karratha, is 10 kilometers wide. It is unique in that it ejected the only meteorite found on Mars made of breccia, a type of sedimentary rock composed of angular, fractured rock fragments cemented together.

Tracing Black Beauty to Karratha could provide new information about the history of Mars. The researchers hope to use the same technique to find other craters associated with the more than 300 Martian meteorites discovered on Earth.

The study was published in the journal Nature Communications.