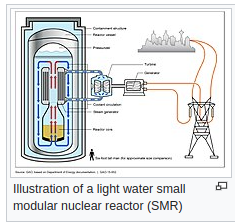 TerraPower, a company founded by Bill Gates, has received $750 million to continue developing smaller nuclear power reactors. The capital raise was co-led by Gates, SK Inc. and SK Innovation. Additional funding from other investors is expected.

SK, which invested $250 million, is part of SK Group, South Korea’s second-largest conglomerate and one of the country’s largest utilities. TerraPower called it “one of the largest capital raises to date in the advanced nuclear energy sector.”

The proceeds will allow TerraPower to advance the development of small modular reactors (SMRs). These are nuclear reactors with about one-third the generating capacity of a conventional reactor.

The company is working to commercialize SMRs, which will be manufactured in factories and delivered to sites to reduce costs and avoid delays.

In November, TerraPower said it will build its first advanced nuclear reactor at a site in Kemmerer, Wyoming. The nuclear power company’s experimental test reactor, called “Sodium,” is expected to be operational in 2028. More than 70 commercial SMR concepts are under development worldwide.

Microsoft: Sony’s PS4 has twice as many units as the Xbox One

Can Apple triple ad revenue with this concept?