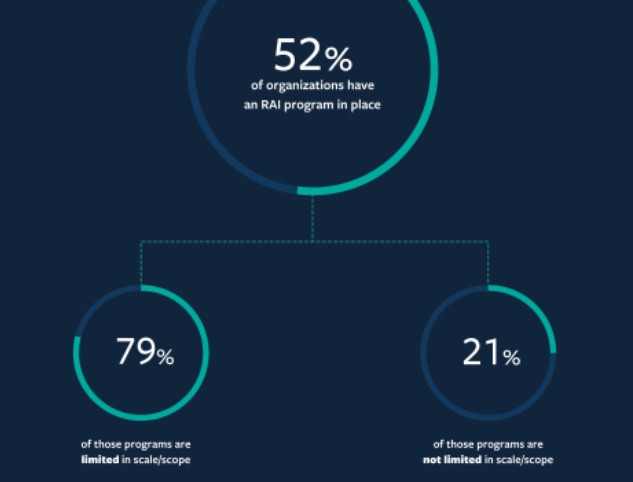 Nearly 80% of companies practicing responsible AI say their framework remains limited in size and scope, according to a study by MIT Sloan Management Review and Boston Consulting Group.

The study surveyed 1,093 respondents at companies with $100 million in annual revenue from 96 countries. The researchers defined responsible AI as “a framework … that ensures AI systems are developed and operated in the service of the well-being of individuals and society, while delivering transformative business impact.”

The results in detail:

79% of them said their implementations are limited in scale and scope.

84% still believe RAI should be a top management priority.

Only 56% said it has already achieved that status in their organization.

54% of respondents said they have difficulty finding responsible AI experts and talent.

Only 16% of respondents were described as “RAI leaders” with the most mature programs.

The survey identified some practices shared by these “RAI leaders.”

Make responsible AI part of the company’s top management agenda. For example, more leaders are involving their CEO in their RAI efforts.

Involve a broad range of participants in RAI.

Start early and launch RAI efforts as soon as possible. According to the survey, it takes an average of three years to see the benefits of responsible AI.