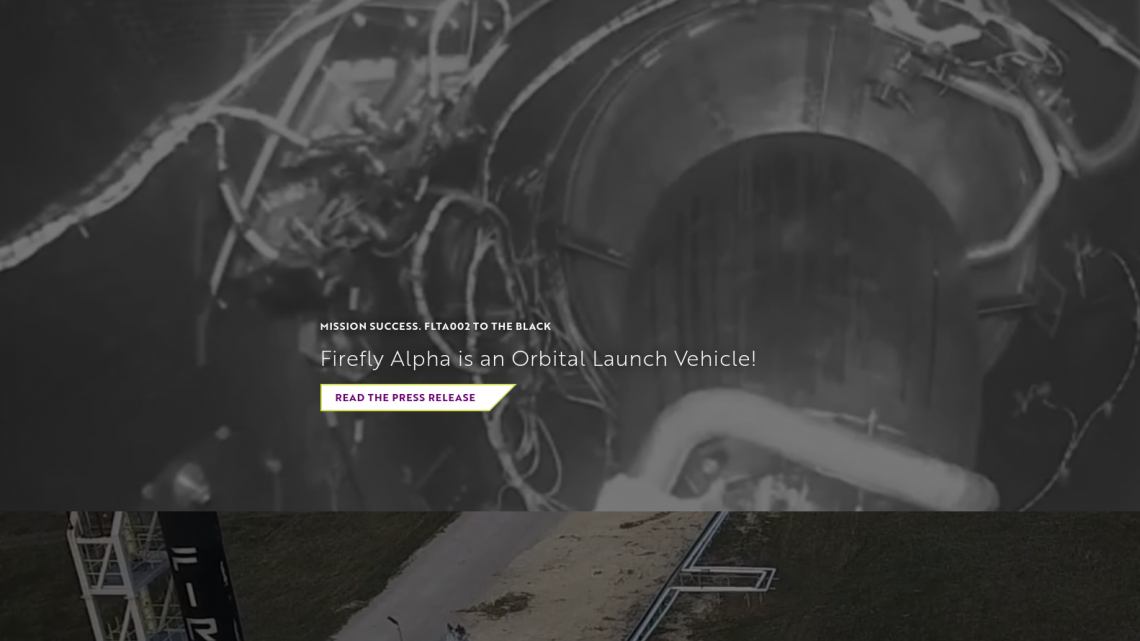 Firefly Aerospace, Inc. recently announced that it has been selected by the U.S. Space Force (USSF) Space Systems Command (SSC) to provide launch services for the SSC’s VICTUS NOX mission. The contract was awarded under Orbital Services Program 4 (OSP-4) as a Tactically Responsive Space (TacRS-3) Launch Service Task Order.
The VICTUS NOX mission will demonstrate an end-to-end tactically responsive space capability, including the launch segment, space segment, ground segment, and on-orbit operations. VICTUS NOX will conduct a Space Domain Awareness (SDA) mission from Low Earth Orbit (LEO).
The startup’s CEO – Bill Weber – is delighted to have been selected by Space Force for this important national security mission. “Now more than ever, our country needs the ability to respond quickly to threats in space. Our Alpha launch vehicle is designed to provide affordable, rapid access to space. We look forward to working with Lt. Col. Justin Beltz and Lt. Col. MacKenzie Birchenough and their experienced team at Space Force to bring this innovation to the national security community.”
Lt. Col. MacKenzie Birchenough, Materiel Leader at SSC’s Space Safari, believes this “end-to-end mission will demonstrate that the United States has the ability to quickly put a facility into orbit when and where we need it, ensuring we can ramp up our space capabilities in the shortest amount of time.”
The goal of the program is to strengthen the United States’ “responsive spaceflight” capabilities so that satellites can be rapidly deployed during a conflict. Lt. Col. Justin Beltz, head of the SSC’s Small Launch and Targets Division, describes it a bit more precisely. The Project, “Space Systems Command is committed to defeating threats in space, and VICTUS NOX will deliver space capabilities in an unprecedented timeframe.”

Firefly is developing a system (family) of space launch vehicles and services that are industry-leading in affordability, convenience and reliability. Firefly’s launch vehicles leverage common technologies, manufacturing infrastructures and launch capabilities to provide LEO launch solutions for up to ten tons of payload at the lowest cost per kilogram in the small launch vehicle class. Combined with Firefly’s spacecraft, such as the Space Utility Vehicle and Blue Ghost Lunar Lander, Firefly provides the space industry with a single source for missions from LEO to the lunar surface or beyond. Firefly’s headquarters are located in Cedar Park, TX.

Skills shortage is a global problem