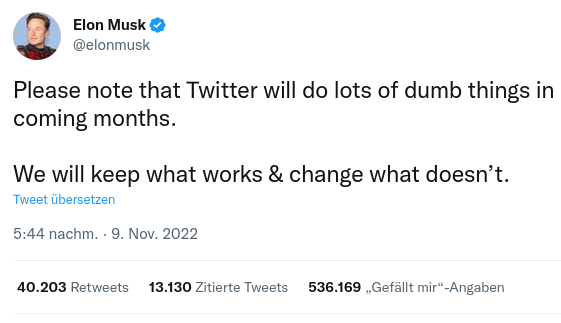 Twitter will postpone the relaunch of its $8 verification system Blue Check until there is a “high level of confidence” that the platform can stop impersonation attacks, Elon Musk said in a tweet. The company had hoped to relaunch the Twitter Blue subscription service on Nov. 29. A new launch date has not yet been announced.

The service, which costs $7.99 per month, includes the blue checkmark for verification and other features. The option was relaunched earlier this month, but experienced a spate of fake verified accounts posing as celebrities and other high-profile figures.

Initially, Musk explained that the service will likely use a different colored check mark for organizations than it does for individuals. In another tweet, he pointed out that Twitter gained 1.6 million monetizable daily users last week, “another all-time high.” Separately, Musk told Twitter employees yesterday that the company has completed the layoffs and is now hiring new employees for engineering and sales.

Before the layoffs, Twitter had nearly 7,400 employees with access to its internal systems. Now it’s down to about 2,700 employees.